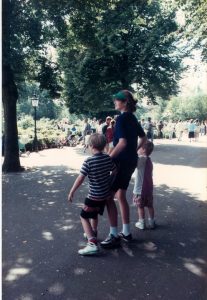 I have two younger brothers, respectively seven and ten years younger than myself. Ask me who or what is dearest to me and I shall name them. This post is dedicated to them.

Invariably, when I think of my brothers a particular song comes to mind; My Brother by Terry Scott and Mitch Murray. The song dates back from the 1950s when my own parents were children. As a child, it was among my favourite songs on my favourite record, a compilation called All Aboard, released in 1979 by EMI Records.

Phorr, there’s something funny round ‘ere. What is it? Oh, it’s you… come ‘ere and sit down. You’re gonna ‘ave the truth told about you and put on record